Back to Where it All Began 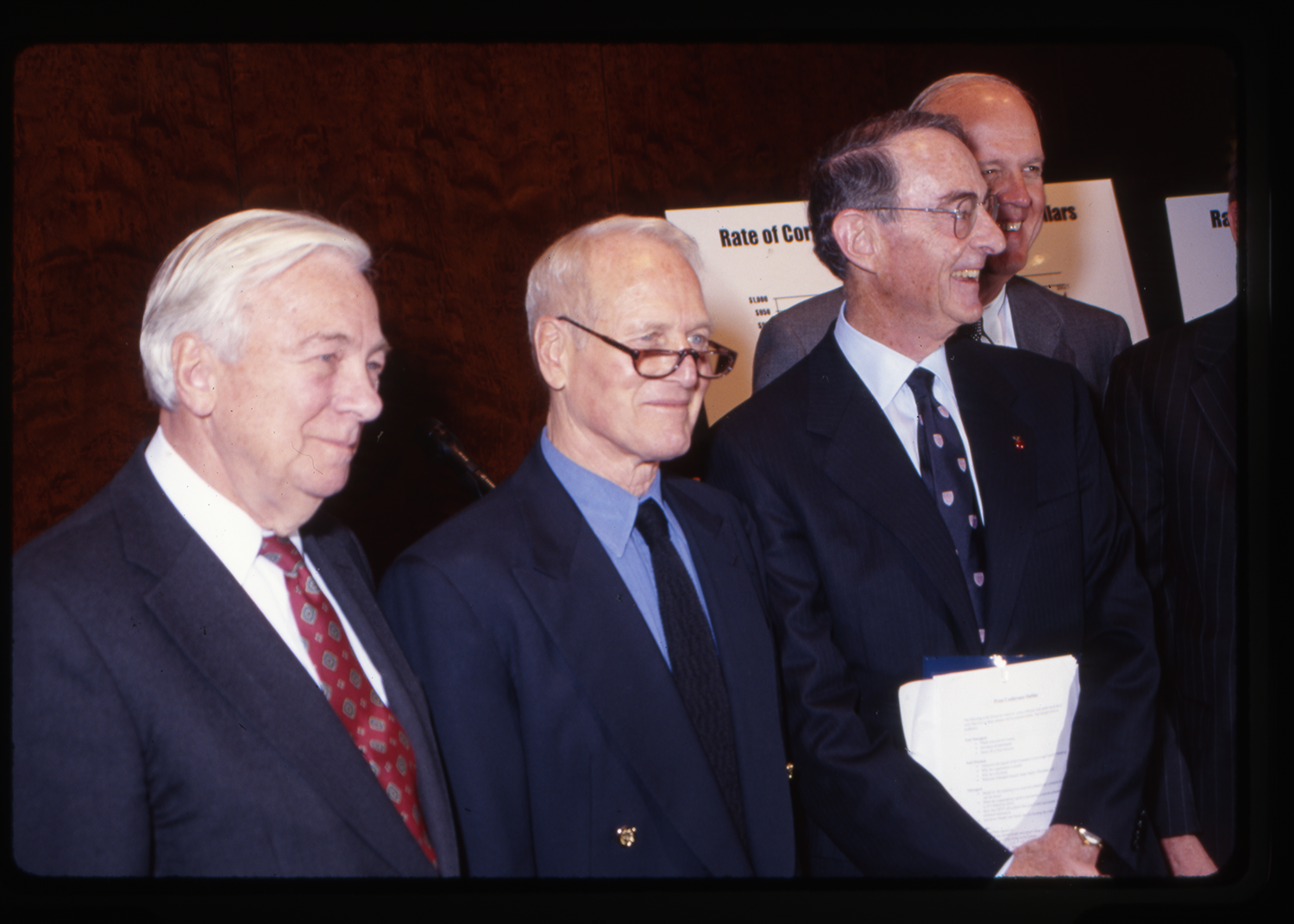 Paul Newman was worried. In 1982, he’d started his own food company, Newman’s Own, Inc., to give all of its profits to charitable organizations to address pressing social challenges. He’d won awards for his work as an actor, a racecar driver, and as a philanthropist, particularly for his work founding The Hole in the Wall Gang Camp for kids coping with cancer and other serious illnesses. Yet, by 1997, the path he’d pioneered with Newman’s Own to utilize corporate resources in service of societal good seemed to be just little more than a footpath, not the speedway he’d envisioned.

Seeking a way to accelerate his impacts, Newman called Peter Malkin, now Chairman Emeritus of Empire State Realty Trust, whose father-in-law, Lawrence A. Wien, had used shareholder activism to increase annual giving by global companies by $100 million. But after Wien suspended his efforts, Newman told Malkin, “Corporate philanthropy is down. Corporations have to step up. They have to do more.” The two discussed what might be done, mulling over various options.

They acknowledged that times were changing; multiple forces were at work to change the powerful local community focus of business. Whereas once executives lived, worked, raised families, and participated in the communities in which their companies were grounded, that bedrock of American business was shifting. There were acquisitions of local firms by larger, often distant companies, which led to a “Why bother?” attitude among remote managers with a single-minded focus on quarterly earnings. The prevailing philosophy at the end of the 20th Century was “the business of business is business.”

Newman and Malkin recalled an earlier era when companies enabled social good, a time when a CEO led the company to invest in communities based on personal passions, supporting the local hospital, art museum, or ballet. Yet, giving was reactive and not likely connected to business strategy. In an era dedicated to short-term earnings, how could they inspire and encourage a new commitment to philanthropy?

The concept that Bob Forrester, former President and CEO of Newman’s Own Foundation, proposed— and Malkin and Newman championed—involved assembling a blue-ribbon panel of CEOs who would call for serious acknowledgment of the important role that corporations play in society, far beyond their ability to make money for shareholders.

With that in mind, Forrester wrote the original prospectus to create the Committee to Encourage Corporate Philanthropy. Affiliation in the group would require a corporation’s commitment to contribute at least 2 percent of domestic profit to social progress. Newman lent his name to bring together a select group of business leaders.

By January 1998, the three were ready to bring the idea to a larger audience. Over a luncheon at The Links Club in New York City, Newman and Malkin met with David Rockefeller, then Chairman of Chase Manhattan Bank; Paul Volcker, former Chairman of the Federal Reserve Bank; and John Whitehead, then Co-Chairman of Goldman Sachs; and enlisted each of them to serve as an Honorary Co-Chair of the committee. Malkin and Newman then invited them and several additional corporate chairmen to a luncheon at The Links Club to launch the organization.

The concept received a positive response: These leaders were all worried about the corporate sector’s aimlessness with respect to long-term value creation, and its lack of support for the critical relationship between community and corporations. Despite the shared concern and enthusiasm, the group faced a number of obstacles. Some members expressed concerns over the word “philanthropy.” Others felt the 2 percent threshold was too high a bar. And some expected resistance to being told by outsiders how to spend their earnings.

CECP’s successes are built on a long history of corporate philanthropy that predates Newman’s concerns. While philanthropy may have once been the prerogative of entrepreneurs seeking to burnish last names such as Carnegie, Rockefeller, and Ford, the notion of a corporation’s responsibility to society had already begun to gain traction. Leaders with the names of Procter, Gamble, Johnson, and Lever understood the relationship of employee and community wellbeing to corporate longevity.

Indeed, much of CECP’s current membership can trace their company’s commitments to positive social impact to their 19th and 20th Century founders. What these companies knew early on is that social purpose was embedded in the genesis and reason for being of the company itself. They are inextricably linked. These were purpose-led companies before the term was coined.

CECP got off to a quick start in office space on 45th Street in a Chase building, with Charlie Moore as its first Executive Director. Moore served CECP for 14 years, growing the membership and instituting many critical programs. Perhaps Moore’s most important achievement, in addition to fundraising, was recruiting successive CEOs to join the committee, starting with Ken Derr then CEO of Chevron.

Another early member, Sandy Weill then CEO of CitiGroup recommended three important principles to CECP’s continued growth. First was to charge an affiliation fee with a suite of services provided to companies, rather than to continually depend on charitable funding. Second was to focus on measurement—and so was born Adding it Up, an early version of Giving in Numbers, which is today CECP’s unrivaled leader in benchmarking on corporate social investments, in partnership with companies. Third was to convene CEOs annually in what is now called the Board of Boards.

The reasoning for the measurement report, according to Moore, was that he and Weill envisioned CEOs would be intrigued with how they compared with peers in their companies’ progress. What they found was an unanticipated benefit. “What they really wanted to know,” recalls Moore, “was what their competitors were doing, how they stack up within their industry.”

Next to serve as Chairman of CECP after Weill was Terry McGraw, then Chairman and Chief Executive Officer of McGraw-Hill. Under McGraw’s tenure, CECP developed what is today the CECP Summit, first held in 2003, designed as an annual way to report on the Giving in Numbers Survey results. The event focused on the needs of the teams within the companies managing the day-to-day interaction with employees and communities. Partnerships and research flourished in this time period, with McKinsey, Goldman Sachs, Taproot, and Accenture. It was around this time that CECP’s Essential Services began to take hold. Affiliated companies came to expect that a call or email to CECP would yield layers of seasoned advice and counsel, the CECP Summit and Board of Boards would provide access to enlightened conversations and insights, Giving in Numbers would fast-track strategies based on data from the field, and the peer network would become a lifeline for an emerging practice.

CECP began to add staff to support this guidance to companies, going from a small but mighty team of 3 in the very early days, to 8 in its teenage years, to 25 today.

The arrival of current CECP chairman Doug Conant, the former CEO of Campbell Soup Company, former chair of Avon, and CEO and founder of ConantLeadership, was a boon for CECP. A New York Times best-selling author and CEO of a global corporation brought his modus operandi of being “tough-minded on standards, tender-hearted with people” to CECP and its companies.

The organization’s name itself has shaped the evolution of the movement. From Newman’s long and steadfast support for philanthropic endeavors came the Committee to Encourage Corporate Philanthropy. Over time, as corporate leaders with the remit of societal investment became commonplace, the organization has recognized the importance of harnessing its momentum to continue to create ever bigger real-world impacts. In 2019, the name Chief Executives for Corporate Purpose was born, reflecting the evolution of the movement to something that transcended the leadership and vision of the company, and continues to advance the field.

Conant, too, has made a mark by recruiting Daryl Brewster in 2014 former President of Nabisco and turn-around CEO of Krispy Kreme, to pick up the mantle when Moore decided it was time to step down as Executive Director. Brewster’s tenure has been revolutionary. He brought with him a commitment to illustrate the long-term value created by corporate social investment, drawing on his private equity expertise. Brewster also infused into CECP a love of annual and quarterly goals, key performance indicators, project management, and impact measurement, diffusing the notion that nonprofits are not run with the same rigor as the corporate world.

To support these burgeoning purpose-led businesses, CECP’s Essential Services continues to take shape, with the affiliated company online portal MyCECP, containing a Knowledge Center and Data Center for self-serve support; Fast-Track Consulting and Insights, a system to answer company questions in short order; Communications Audits to assess effectiveness of external and internal corporate outreach efforts; monthly roundtables and webinars focused on issues areas, sectors, or geographies; and Accelerate Projects and Opt-In Opportunities for companies to pick and choose the deep-dive services that would meet them where they are on their journeys; as well as a redoubling of the tried and true events, benchmarking, and counsel from CECP experts on which this peer group has come to rely.

Happy anniversary CECP! We look forward to what’s next!