Behind the Numbers: What do Trends in Corporate Giving Mean for You? 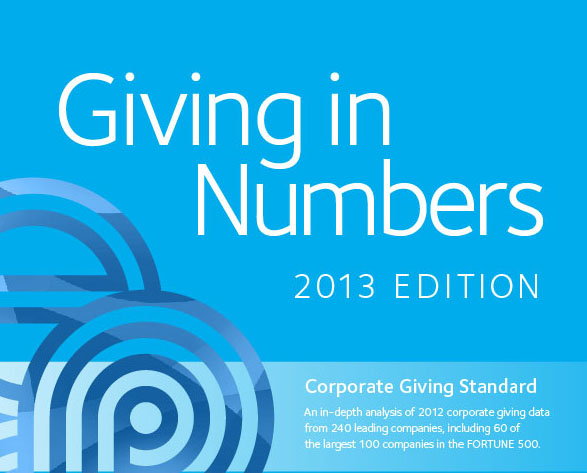 October 1, 2013–CECP, where Fortune 500 companies turn to achieve societal progress and sustainable business performance, recently released its annual Giving in Numbers – 2013 Edition. We analyze in that report how corporate giving evolved during the global recession of 2008 and 2009; despite a slow economic recovery, we found that the majority of companies are already giving more than before the recession. Eleven of 14 California-based companies participating in the longitudinal study increased giving from 2007 to 2012.

There are three core trends we recognized in this global analysis: Companies are striving for 1) deeper impact, 2) greater use of non-cash resources, and 3) more meaningful employee engagement. But what does that all mean to you? In this article, I take you behind the numbers to assess takeaways for each trend from a variety of perspectives.

1. Companies are striving for deeper impact (both societal and business impact) with each grant processed for community partners. Since before the global recession, the median corporate grant size has increased from $20,050 in 2007 to $26,614 in 2012. This growth is related to the trend that companies are offering fewer grants per year (1,681 in 2007 and 1,287 in 2012). In addition, corporate giving is becoming more focused to single program areas, like Education or Health & Social Services.

Behind the Numbers: Competition for grants from corporate funders has grown tremendously in the past half decade. Corporate funders should clearly communicate their business and societal goals to improve transparency with potential grantees. Nonprofit organizations should focus grant writing to corporations that clearly align with the nonprofit’s mission and long-term goals.

2. Companies aim to utilize core non-cash resources more than ever before. The average company still gives more cash than in-kind contributions but, among companies that provided non-cash support in 2007 (the first year of our longitudinal study), the median percentage change in non-cash contributions was +38%! Information Technology companies, many based in California, provide on average 22% of total contributions in the form of non-cash gifts (primarily product donations and pro bono service).

3. Companies are engaging employees for a variety of reasons, depending on the unique circumstances of the company’s financial situation. In 2007, 53% of companies offered domestic Paid-Release-Time volunteer programs. By 2012, 70% of companies had such offerings. Digging into the numbers, we learned that volunteer offerings increased both for companies that increased and decreased giving since before the global recession.

Behind the Numbers: Companies that have decreased giving due to diminishing financial performance still want to make a difference in their community. Deploying employees as volunteers offers a chance for corporations to support the community without making significant financial commitments. Companies that increased giving, on the other hand, strived to engage employees in their expanded grantmaking by working with grantees to couple financial awards with volunteer opportunities. Nonprofit organizations will become more competitive for large grants if they are able to showcase the effects of grants through meaningful volunteer activities. As for benefits to the company, a recent study by UnitedHealth Group showed 81% of employed volunteers who volunteered through their workplace agreed that volunteering together strengthens relationships among colleagues!

Does this match what you are seeing in your organization? What other trends are you seeing from corporate funders? Whether you work for a business or a nonprofit (or anywhere else!), let us know what you think about the evolution of corporate societal engagement. Contact CECP at info@cecp.co.