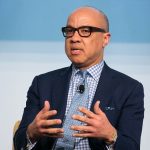 June 16, 2016– “A Call for Corporations to Aim Past Wealth Toward Goodness and A Better World”
I’ve always been fond of a sentiment that Horace Mann—the great American abolitionist and foundational reformer of the American education system—once confided to his journal:
“If any man seeks for greatness,” Mann wrote in October 1838, “let him forget greatness, and ask for truth, and he will find both.”[i]

So it is with inclusive capitalism.  As many companies and chief executives are finding, by aiming for good and profit, they can help deliver economic opportunity and social returns, while also serving their bottom line.  By setting aside short-term earnings for shared social advances, they are finding both.

A few weeks ago, I was honored to be invited to speak at the annual conference of CECP, an organization made up of more than 150 Chief Executive Officers who embody this higher aim—thinking and building their companies for the long term. Founded in 1999 by business leaders John Whitehead, Peter Malkin, Walter Shipley, Paul Newman and other executives, with support from the Ford Foundation, the CECP continues to inspire and to promote the idea that creating a more equitable global future isn’t just good for the world, but good for business, too.

In conversation with Sarah Murray, reporter at The Economist and the Financial Times, I discussed the Ford Foundation’s commitment to fighting inequality in all of its forms. We discussed how, after consultation with our grantees and the people in need who we hope to serve most, the foundation found that the experience of structural inequality—cemented over generations, enforced and upheld by societal rules and systems in which we are all complicit, and layered by race, gender, class, and other categories—is still a fault line in societies around the world.  And it’s this rising inequality which has contributed to the current political climate, and threatens our democracy and opportunity for all.

In partnership with foundations, government and civil society, the corporations can leverage their unique assets in the fight against inequality.  Indeed, a future society rooted in fairness and justice will only be possible when corporations put aside the single goal of being the richest company in the marketplace and replace it with a positive vision to help solve the world’s biggest problems. And philanthropy and business must hold each other (and the market) accountable as we continue to work together towards this common goal.

After all, if Horace Mann was right—and there is ample reason to believe he still is—then success comes to those who aim beyond success as an end itself. For companies that put solving problems and fostering human progress at the heart of their work, business and progress can work can work hand-in-hand.