Giving Around the Globe 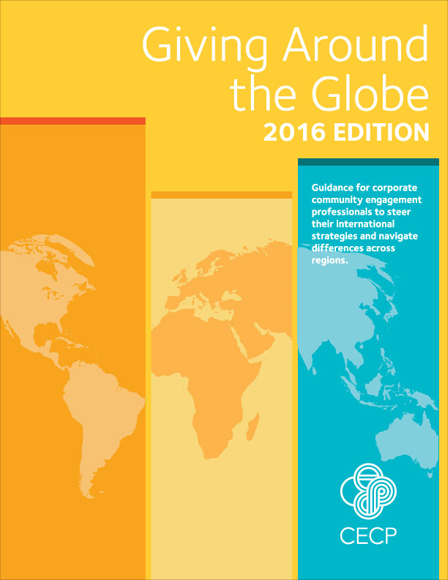 February 24, 2015– I have just read the second annual Giving Around the Globe report from CECP (I am a board member), a coalition of 150 global CEOs who are a force for good, on giving patterns of companies based in North America, Europe, Asia, Africa and Latin America. Here are some of the most interesting findings:

1. North American companies are most likely to give to recipients in the UK, Mexico, China, Brazil and India. Giving by North American-based companies increased substantially to the Philippines in the wake of Typhoon Haiyan and to China after the earthquake in Sichuan province.

2. European companies give substantially outside of their home region. This tends to be done via operating units (48 percent) and then foundations (42 percent). Only 27 percent of European companies have a pro-bono program for employees domestically, but they commonly offer paid company time to volunteer (86 percent). Total giving per employee is $456 and giving is .17 of total revenue.

3. Asian companies prioritize corporate matching (94 percent) over volunteer programs (64 percent). Total giving per employee is $680 and total giving is .13 of total revenue. The biggest donor categories are industrial and financial services companies, giving well over the median per employee. Some of this giving is pushed by legislation: as of 2014, India has a law that mandates allocation of two percent of profit to corporate social responsibility programs. Indian companies stand out as giving domestically whereas Japanese, Australian and Chinese (70 percent of their companies) give overseas as well.

4. Latin American companies prioritize local giving. There is little in the way of employee engagement/matching gifts or volunteering on company time. The donation per employee is $391 and the giving percentage is .14 of total revenue. There is mandatory donation in Brazil, which accounts for as much as 47 percent of total social investment, focused on domestic environmental programs; the most involved sectors are industrials and materials. Company operating units account for 74 percent of total cash donated.

CECP is an invaluable source of benchmarks for those in the corporate societal engagement space. I recently attended their annual Board of Boards CEO convening, Winning on Purpose, where it was an inspirational prod to the CEO attendees to hear such leaders as Bob Moritz of PwC (client), Tom Wilson of Allstate and Hamdi Ulukaya of Chobani discuss their tangible contributions to their communities. For example, Wilson has spearheaded the Get IN Chicago campaign that aims to reduce violence in urban neighborhoods. Moritz gave a business case for purpose focused on the Millennial employees at his firm, who get a training program in life skills after their third year on the job so they can be more effective volunteers in the community. Ulukaya donates 10 percent of the revenue of the company to charity under the framework, “How Matters,” from building a baseball field in his plant community to improving human capital through training. CECP CEO Daryl Brewster stated that, “While it is common sense that companies should infuse a higher purpose throughout their core strategy to see business value, it does take uncommon leadership to do so. Sixty-one percent of CEOs at the Board of Boards reported that their companies operate with a larger purpose, and another 26 percent are on their way.” The CEOs yesterday also agreed that it is time to speak out on societal issues, to be who you are and demonstrate that business exists to solve society’s needs. Now that is a worthy objective.