Leading and Following by Example: Companies Taking a Public Stance on Social Issues 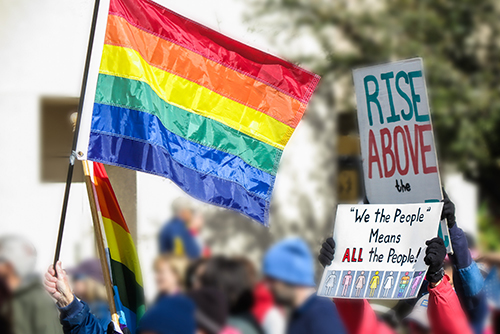 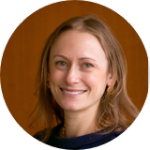 When it comes to public stands by corporations, issues in North Carolina and Indiana both drew significant attention over the past year. PayPal didn’t expand operations in North Carolina and Salesforce’s threat of reducing jobs in Indiana changed the tide of public policy. And for every success, there were also examples of consumer backlash. In an increasingly polarized environment, CECP looked to its network to explore how companies may or may not be changing their strategies to advocate publicly.

Sixty-one percent of companies are sticking to their public advocacy strategy, with more than 20% advancing their strategy in response to public reaction to corporate leaders’ stance on social issues (CECP’s pulse survey, April 2017). Recent public stands on social issues by companies have seen public reactions on all points of the spectrum. While some companies advocate forcefully, others don’t, and any approach is subject to public challenge. To better equip corporate leaders facing challenges to these strategies, CECP asked members of our corporate coalition to weigh in on how attention received by other companies is affecting their company strategy for speaking out on a social issue. 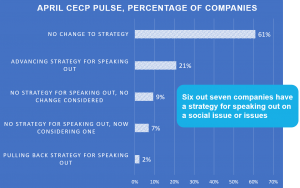 These findings corroborate national media reports on businesses taking public and legal positions on social issues that affect their employees and threaten their ability to compete and do business effectively. Companies are doing this despite the risk of negative attention from some segments of the public and lawmakers because of the potential impact on their stakeholders.

Companies that are speaking out regardless of public response say they are doing so because the “issues are important to us or relevant to the business.” Per Rafael Gioielli, CSR General Manager, Instituto Votorantim, “[C]onsidering that society [is] more aware of the social impacts of a company, we are advancing in our strategy, being more transparent and responsive to our impacts.”

Taking a public stand doesn’t mean being a lone voice. Take, for example, the amicus brief that was filed on April 19 on behalf of 162 technology firms, including CECP-affiliated companies eBay, Google, Intel, Microsoft, PayPal, and Salesforce.com, Inc. in response to President Trump’s Executive Order restricting refugees and travelers from several majority-Muslim countries. According to the technology news website Recode, the brief claimed that the order “hinders the ability of American companies to attract talented employees, increases costs imposed on business, makes it more difficult for American firms to compete in the international marketplace and gives global enterprises a new, significant incentive to build operations — and hire new employees — outside the United States.”

The federal government’s rescinding of guidance for transgender students in February also saw several CEOs quickly take public positions via social media (particularly Twitter), public statements, and company websites. Some CEOs cited their company’s non-discrimination policy as an indicator of which side of the debate they were on, while others offered personal convictions in response to the action.

Corporate leaders may find helpful an article from Leslie Gaines-Ross, Chief Reputation Strategist,  Weber Shandwick, “What CEOs Should Know About Speaking Up on Political Issues.” Gaines-Ross offers five useful guidelines for CEOs and their teams ready or thinking about taking a public stance, but also reminds us Weber-Shandwick’s research has found that that “the two biggest factors that influence respondents’ opinions about companies are what customers say about them (88%) and how they react in crisis (85%). In fact, how a company responds to a controversy, including how quickly, is [the most] important in driving public perception about the company.”

CECP discussed this growing trend among business leaders in December 2016, citing AT&T, Target, and Patagonia as companies taking brave steps and their CEOs playing statesman-like roles on issues ranging from race relations to living wages and supporting environmental organizations. CECP expects this to continue, particularly with global tensions increasing on social and business issues. According to a Public Affairs Council study, pressure to engage on social issues in the last three years has increased for 60% of companies.

Companies are well-positioned to help provide solutions to some of the world’s most pressing problems – 66% of CEOs that attended CECP’s 12th annual Board of Boards event in February agreed that companies will lead progress toward long-term societal improvement, and another 17% felt that speaking publicly, in their own voice, on what their company is doing and why is an effective move towards sustainable leadership.

In the words of Cecily Joseph, VP, Corporate Responsibility and Chief Diversity Officer, Symantec Corporation and one of the respondents to CECP’s survey, “We can’t afford to sit frozen, as our…constituents and society’s pressing issues cannot wait.”