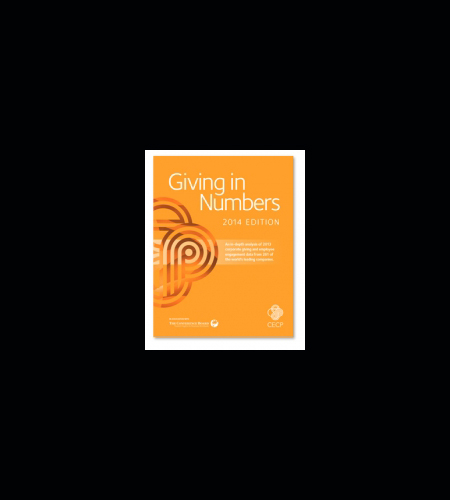 October 27, 2014–According to CECP’s recent research report, Giving in Numbers: 2014 Edition, companies had to give a minimum of about 2% of Pre-Tax Profits to be in the top quartile of corporate givers. Is that a lot? Depends who you ask! One potential comparison is to American individuals—a Chronicle of Philanthropy study found that American individuals give, on average, about 3% of their income to charity (it’s a pretty cool study—they found that those earning more than $200,000 per year are giving less since 2006, while middle- and lower-income Americans are giving more!), which is more than the typical company (albeit in an imperfect comparison). On the other hand, companies in the CECP study collectively gave more than $25 billion in 2013, which is a significant amount of resources having deep impact in communities around the world! This year’s Giving in Numbers report provides expansive benchmarking data to help companies determine how much to give, as well as how to engage employees in their commitments to the community. In this blog, I share a couple surprising findings from this year’s report.

My first surprise was that non-cash giving accounted for more than 90% of the aggregate total giving increase since 2010 – and these in-kind contributions are coming from unlikely sources. Service companies have increased non-cash gifts since the end of the Global Recession, whereas Manufacturing companies have decreased non-cash giving as a percentage of total giving. Non-cash gifts include product donations, Pro Bono Services, and other types of in-kind donations (such as office equipment).

This was a surprise because Service companies have historically given significantly less non-cash as a percentage of total gifts than Manufacturing companies. In 2013, Manufacturing companies gave approximately 20% of total gifts in the form of non-cash, whereas Service companies gave 18%. This gap of two percentage points is the smallest we’ve ever seen in our full sample—in fact, 2013 was only the second year that difference was in single digits (2012 was the only other year).

I also assumed non-cash giving growth would have come from companies that develop or sell products and donate them on a regular basis. I’m thinking of the companies that manufacture goods to sell to other businesses, or retailers that sell to end-consumers. However, I found that these types of companies making predictable non-cash contributions every year of the study (2010-2013) actually decreased median non-cash gifts by 16% from 2010 to 2013.

The Power of Employees

Another surprise in the development of Giving in Numbers was how influential corporate employees have become in CSR strategies. CEOs at CECP’s annual CEO meeting, the Board of Boards, prioritized employees ahead of customers, boards of directors, and shareholders, when asked which stakeholder group would matter most in a decision to increase community investments. I always assumed employees would be near the top but I was surprised at how far ahead of other groups they were, as illustrated in the report. Not surprisingly, an increasing number of companies are giving time off to volunteer and a whopping 86% of companies match employee contributions to qualifying charities—that’s a higher percentage of companies than are running a corporate foundation! They understand the benefits to the business and the community of engaging their workforces in making a societal impact.

Furthermore, a majority of media interviews I’ve given in the last year have focused on employee engagement. Here, here, and here are some interesting examples of the types of things media have contacted CECP about in the last year.

These are just a couple of my most surprising findings. Were you surprised by other findings in the report? What other areas of interest should we be exploring in our research? Please let us know!